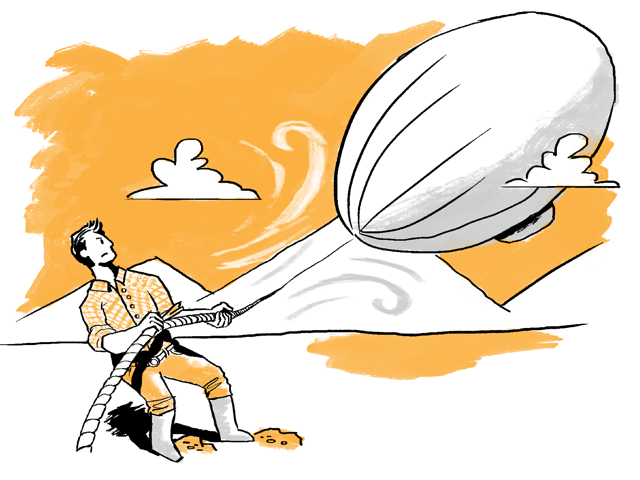 Rails memory issues are frequently more difficult - and more urgent - to resolve than performance problems: a slow Rails app may be painful, but if your app chews through all available memory on a host, the app is down.

This chapter shows how to identify memory-hungry controller-actions and specific memory-hungry requests, provides a visual representation of common pitfalls, and suggestions on fixing memory bloat.

Visually, here’s the difference between bloat and a leak: 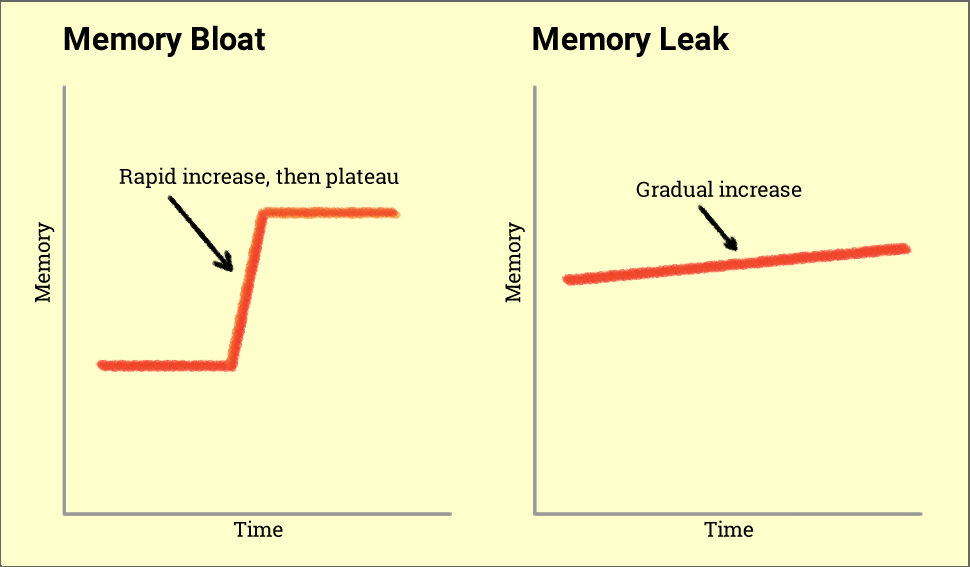 While memory bloat can quickly cripple a site, it’s actually easier to track down the root cause than a memory leak. If your app is suffering from high memory usage, it’s best to investigate memory bloat first given it’s an easier problem to solve than a leak.

What goes up doesn’t come down

If one of your app’s power users happens to trigger a slow SQL query, the impact is momentary. Performance will likely return to normal: it’s rare for a slow query to trigger long-term poor performance.

If, however, that user happens to perform an action that triggers memory bloat, the increased memory usage will be present for the life of the Ruby process. While Ruby does release memory, it happens very slowly.

This behavior changes how you should debug a memory problem versus a performance issue.

The chart below shows requests from two endpoints, Endpoint A and Endpoint B. Each circle represents a single request.

Which endpoint has a greater impact on memory usage? 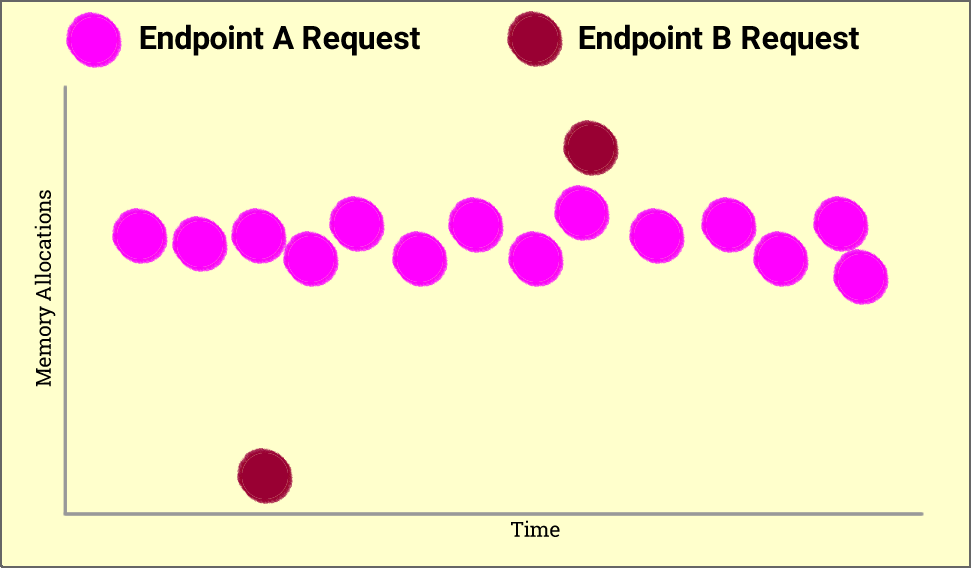 If the y-axis was “response time” and you were optimizing CPU or database resources, you’d very likely start optimizing Endpoint A first. However, since we’re optimizing memory, look for the Endpoint with the single request that triggers the most allocations. In this case, Endpoint B has the greatest impact on memory usage.

What you need to know about memory bloat

In order of importance:

Scout can help you identify memory-hungry areas of your Rails app by:

If you’re looking for a general understanding of which controller-actions are responsible for the greatest amount of memory bloat in your Rails app, a good starting point is the “Endpoints” section of Scout:

Sort by the “% Allocations” column. This column represents the maximum number of allocations recorded for any single request for the given controller-action and timeframe. Why max and not mean allocations? See this section above.

Click on an endpoint to dive into the Endpoint Detail view. From here, you can click the “Allocations - Max” chart panel to view allocations over time.

Beneath the overview chart, you’ll see traces Scout captured over the current time period. Click the “Most Allocations” sort field from the pulldown. You’ll see traces ordered from most to least allocations:

The screenshots below are generated from actual Scout transaction traces. A quick primer on the trace organization: 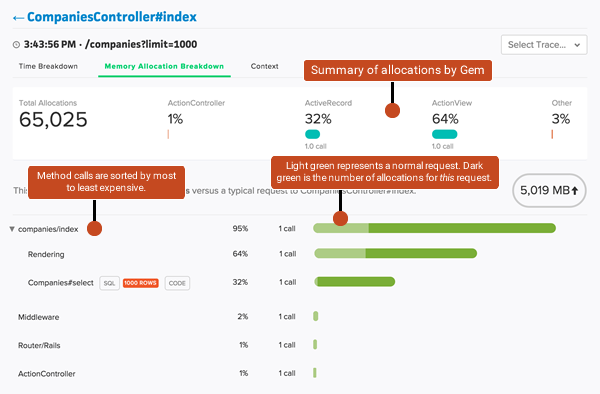 It’s common for memory bloat to be isolated to a specific set of users. Use Scout’s context api to associate your app’s current_user with each transaction trace if it’s not easily identify from a trace url.

Memory bloat often reveals itself in specific patterns - these patterns are illustrated via the Scout transaction trace below.

When rendering the results of an ActiveRecord query that returns a large number of objects, the majority of allocations frequently come from the view and not from instantiating the ActiveRecord objects. Many Strings are allocated to represent each object’s attributes as well as any HTML template code around them (table rows and other HTML elements).

The screenshot below illustrates the difference between rendering a view with 1,000 records and one with ten. Two-thirds of allocations reside in the view: 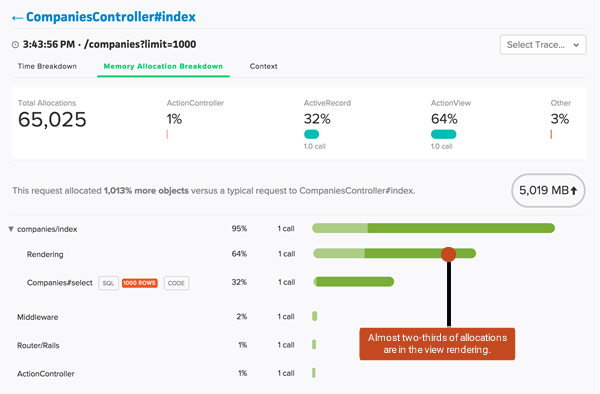 An example where this occurs:

Fetching and rendering all employees for a company may work fine for the latest small startup, but it fall over for Apple, Inc.

The fix? Pagination via will_paginate or Kaminari.

You probably already know N+1 queries are low-hanging fruit when it comes to speeding up your controller-actions. However, in addition to frequently being slower than a proper includes, they result in more allocations.

The example below illustrates an N+1 when rendering out a list of 100 users and their associated company. Roughly 2x more allocations result from the N+1: 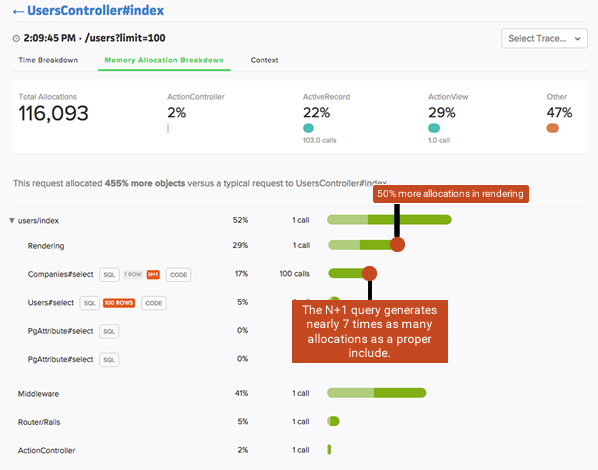 The steps to fixing N+1 queries are well-documented: the larger challenge is finding the worst offenders. Scout can be used to identify the worst-offending N+1 queries in your app.

The standard ActiveRecord finder selects all columns from the respective table:

If a table contains a large column (binary or text), there’s a cost both in terms of memory usage and time if that column is returned. This is true even if the column is never accessed.

Identifying this scenario is more involved: if a large column isn’t accessed, it will not trigger additional Ruby allocations and will not appear in a memory trace. Instead, look at the change in memory for that request: 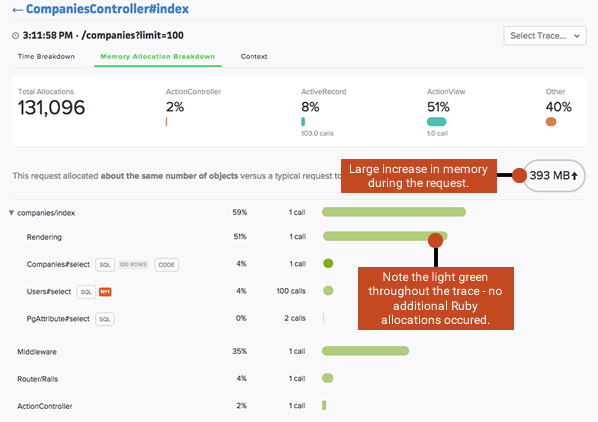 It’s also likely the query may run slower as more data is read from the database and sent across the wire to your app host: look for a slow query in the “Time Breakdown” section of the trace.

Your app will incur a significant memory increase to handle large file uploads. For example, the trace below illustrates the increase in memory usage when uploading a 1 GB file vs. a 1K file:

The majority of allocations occur unwrapping the file in the framework middleware. A common scenario where this behavior occurs: an app manipulates uploaded images that are typically 100-500 kB in size, but then a user attempts to upload a 10 MB image.

The workaround: send large files directly to a third party like S3. See Heroku’s docs on Direct to S3 Image Uploads in Rails.

We're publishing chapters as we complete them. Enter your email address below to be notified of updates to the Rails Performance Fieldbook.